What an absolutely lovely island. The people are not without their flaws, however, but humans are humans, I suppose, but more of that later. Aruba is one of the ABC islands that make up the Dutch Antilles, namely Aruba, Bonaire and Curacao, but don’t try spending euros here, they only want American dollars and, unless you specifically ask, they will try and give you your change in East Caribbean Dollars. It is odd holding a coin that says ‘One East Caribbean States Dollar’ on one side and has the Queen’s head on the other. Yes, Queen Elizabeth the Second. Yes, I know I said it was the DUTCH Antilles. Yes, it is part of the Kingdom of the Netherlands. Like I said, it’s confusing. I don’t think the Netherlands royal family has a Queen Elizabeth the Second, I’m pretty sure it’s our queen. It’s not a Barbadian dollar, that’s for sure, but other islands, such as St Kitts, Antigua, Dominica, St Lucia, St Vincent and the Grenadines and Grenada use the ECD as well… I think. I’m sure the Netherlands does have a royal family, but I don’t claim to be an expert. Can someone ask James for me? I thought the Euro would be currency here, but apparently not. The trouble is that every single island around the Caribbean has a different language and most have a different currency and my guide book, which was last updated in 2008, seems woefully out of touch, and is so virtually worthless on the topic. Luckily, they ALL accept the US dollar (except Cuba), so as long as you remember to ask for US change, it’s not really a big problem. It’s just making my head hurt a bit.

Anyway, I digress. Aruba is lovely. They know their market (most American cruise ships stop here) and the usual dose of Diamonds International, Emeralds International and cigar shops line the road that runs between the dock and the town. In fact, most of the shops in Oranjestad are jewellers or expensive designer labels. There is free wifi and cafes to eat at, including all the major US chains, such as Iguana Joe’s, Hard Rock Cafe, Pizza Hut and Dunkin Donuts. In fact the only non-chain cafe I could find was closed! Mum and Dad saw Wendys, KFC, Senor Frog’s and another Hard Rock on their excursion out of town, as well. They took a glass-bottomed boat to look at the fish on the coral reef and also saw a shipwreck under the sea. I refrained from taking yet another boat and just pootled around the town on my own. It’s really very pretty indeed, particularly as one of the shopping malls, centred around jewellery and t-shirt shops as per the norm, was designed to look vaguely like an Indian temple, only pink. I’ll try and upload a photo. It is by far the prettiest shopping mall I have ever seen. 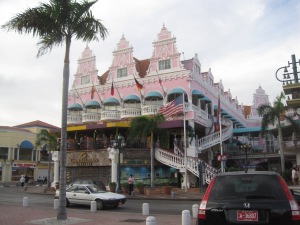 Minimum spends on credit cards exist here, as with many of the islands we have visited, but, unfortunately, this place is so much cheaper, it is virtually impossible to spend twenty dollars! In one bar, I bought a cocktail, a large Diet Coke and a bowl of fries, but I still only spent eleven dollars! I simply couldn’t take in any more! In St Maarten, a t-shirt cost about twenty dollars, so that was easy. Here, they cost ten, which makes things much more cash-intensive!

Mercifully, the Dutch Antilles are not only far enough west and south (only 17 miles from Venezuela) to be beyond the hurricane belt, but are also coral, not volcanic, and therefore not rainforest and not nearly as humid as previous ports, so we only had heat to contend with, which is much easier to take, particularly in conjunction with a light sea breeze. In order to protect the coral, in fact, which virtually surrounds the island and most of which is protected National Marine Park, we were escorted in, through a very narrow channel, by a tug which nudged us if we veered too near the edge of the demarcated line. Being nudged by a tug is no little thing, trust me. We got quite a jolt!

Anyway, I said I would talk about humans. There was a cruise ship full of Americans in today, which probably made town probably significantly more noisy than it otherwise might have been. Don’t get me wrong, Americans are lovely and always friendly, but they are a noisy bunch!

As regards noise, they need to build a bypass. They’ve created this beautiful waterfront shopping heaven with food and all lovely stuff and they’ve even build a little clock tower with a carillon on top (that plays at completely random intervals), but then they drive container lorries with engines that make your ears bleed right through the middle. Definitely time to build a bypass or motorway of some sort.

But it was a local woman who made the most noise. She left a bag on a bench and a homeless man walked off with it. When she challenged him, he asked for money in exchange for its return. She refused and threatened to call the police, but in the end, she just left without it. The shop assistant explained that the homeless man hadn’t stolen anything, he had simply taken what he found, perfectly legitimately. Clearly, the law is different here, because in England we have an offence called Stealing by Finding. But here, everyone just shrugged and let him walk away with whatever it was he had found. And before you ask, no, I don’t speak the local lingo – every island has its own patois, you’d go insane learning them all – she explained it to me in English!

Tonight, we have each received our specially-printed invitation from someone called BBC World News to attend the wedding of some people called Kate and William. 4am, they want me to turn up on Friday, apparently. Yeah, right. I don’t care how much or little of a royalist you are, 4am is a bit much…