The water doesn’t LOOK like it’ll kill you, although Dad is quite sure the water on the port side looks colder than that here on the starboard side. I might venture to suggest this signifies a somewhat overactive imagination, because I’m pretty sure it’ll all kill you in a matter of minutes, whichever bit you fall into. 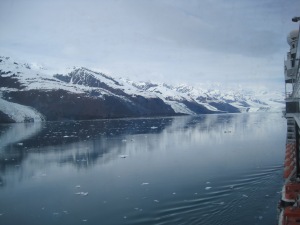 Glaciers to the right of us, glaciers to the left of us, it’s all getting a bit Charge of the Light Brigade, frankly. No matter which way you look, there are glaciers. Big ones, small ones, five in one photo. All named after American colleges, men’s colleges on one side, women’s colleges on the other. Hence College Fjord.

All filling the water with bergies for the otters to swim round. Yes, we have spotted otters, probably American sea otters, which, for the record, are MUCH larger than British otters. Around three times the size. Think medium sized dog, rather than cat sized, as British ones are. If you’re are VERY lucky, you can spot the occasional little head popping out of the water and charging along for a few yards before diving back under. The only way to glimpse them is to look for their wake and then follow it forwards to its point. Most of the time, when you get there, it’ll have already gone back under and all you’re left with is a photo of the wake. Like this. 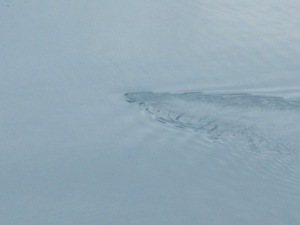 Luckily the water is so still, it should be fairly easy to spot their wakes. The only complication is that the vibration of the ship, slow as we are now going, causes the bergies to bounce in the water, so that each creates a circular set of ripples of its own. 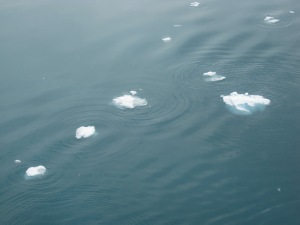 This, if you’ll pardon the expression, muddies the waters ever so slightly, as most of the ripples are bergies, not otters. Oh well, no one said it would be easy. In addition to which, the bergies here are very dirty indeed, many are completely black, which suggests to me that they are quite fresh and have only recently fallen into the frigid turquoise, and the bouncing up and down actually washes them as we pass. 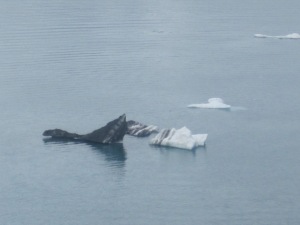 Once again, we find ourselves at a dead end and after circling for four hours, we have no alternative but to go back out the way we came in.

It is a little sad how quickly you can become used to such beauty. Only hours after arriving, I find myself impatient to go somewhere else, look at something else, be somewhere different, and I consider myself quite a still, contemplative person. I can’t imagine how bored the faster movers and people so impatient to get a dessert they’ll shove you aside in the blink of an eye must be. Yes, it’s beautiful, yes, it’s awe-inspiring, but, you know what? It doesn’t change while you watch it. These things move inches a YEAR and we are here for four hours. We’re not going to see anything change or move. It’s all just as lovely when you leave as when you arrived. I can’t help but feel that most of the growlers that drop bergies into the water are not witnessed by any creature, human or not. There’s simply no one and nothing here. It is all so similar to yesterday. All that is different is the sheer number of glaciers. There’s no wildlife, of course, because we are even further north now and hibernation isn’t over for at least a month. There aren’t even any birds.

At 5.30, I called it quits. I made it as far as the lift lobby before someone told me that someone claimed to have seen a bear. I’m not sure I believe this any more. It seems so unlikely that a bear would be awake this early and there is nothing to eat – no grass, nothing – here, so unless it finds fish that we didn’t, it won’t last long. On the contrary, I have heard people, in their cups, claim to have started false alarms, just to make people run, just to see the reaction. They think it’s funny. I find it hard to find such deliberate cruelty amusing. People are desperate to see the wildlife, this may be the only chance they have in their entire lives to see a whale or a bear in the wild, and I’m quite sure that some of them find the idea of having just missed something very distressing. Whilst the average age on here is significantly lower than on most other long cruises I’ve been on, as I’ve already mentioned, there are still people here for whom such distress could be rather dangerous. I just think it’s unkind. Unnecessarily unkind. There are enough genuine disappointments in life, both big and small, without some idiot with a warped sense of humour inventing new ones for you to add to your collection. I won’t believe there was a bear here today until I see dated photographic proof.

Wow. What a meal we are making of mooring up. Welcome to Whittier. We’re due in at 10pm and we’ve either got a beginner doing the parking or someone is stalling for time, because we have been alongside but several feet out for nearly fifteen minutes now. Arriving the night before anywhere is exciting, because it gives a rare chance to experience the nightlife of a place. We normally arrive in the morning and leave at dusk, on the evening tide, so this is a rare treat. Now all we have to do is wait for them to let us off. How exciting!